ExplorerCraft provides map recipes and items to make it easier to explore and to manage maps. ExplorerCraft provides an Atlas that can hold up to 36 maps, updating all of them as you travel and displaying the best it can find for you at any time. You can create new maps perfectly aligned to existing maps without having to go to the center of the mapped region, either beforehand at a workbench or as you travel with an Atlas. It allows you to copy overlapping regions between existing maps – no more wasted exploration! It provides a new way to expand maps which is easier than the vanilla mechanics *and* keeps the information already on the smaller map. Finally, it provides a marker system with 16 different colored markers. These can be placed or removed on maps in the field, and once placed, appear on map in atlases, in your hand, and on item frames.Vanilla map recipes still work as before if you prefer them.ExplorerCraft only functions in the Overworld (dimension 0). It cannot currently create maps in other dimensions, and Atlas behavior is unpredicatable.

ExplorerCraft sometimes has to use map numbers before actually making the maps, for technical reasons. If the map is not actually made, the number will be temporarily skipped. ExplorerCraft remembers these numbers and will use them later when possible.

An Atlas is an item that can hold up to 36 maps, empty maps, expanded empty maps, or unused map markers. You can add maps to or remove maps from an Atlas by right-clicking the ground with it in your hand. If it’s in your hand, the “best” map will be displayed, and ALL the maps will be updated with terrain info as you travel past. The best map is the most detailed one you’re on. If there’s a tie, it shows the one with the closest center. If you’re not on any map, it picks the one with the closest edge. An empty atlas shows a blank map.

Atlas will also automatically create new maps that tile with existing maps if necessary and possible. If you’re not on any map in the Atlas, it uses empty maps it has to tile with similarly-sized maps you’re adjacent to. If you’re not adjacent to any map with a matching-sized empty map it does nothing. You can stop this feature by keeping empty maps out of your Atlas.

If you’re using the auto-tiling feature it would be safer to have only one size of empty map in the Atlas, and make sure all the maps that size tile. If the Atlas has to decide which grid to tile to it might not pick the one you want. Also, the Atlas knows nothing of any map not in it, and so if you walk onto an area you have a map for but didn’t put in the atlas, it might make a duplicate you probably won’t want.

An Atlas must be in your hand to work. It does not function on the hot bar or in your main inventory.

Map Paper (8 piece of paper compacted to one icon). Map paper can be used instead of normal paper for any of the map functions but you need 1/8th as many pieces. You can’t make it back into paper and that is deliberate; I don’t intend it to serve as a storage and transport system for paper. It only stacks to 16. Expanded Empty Maps: Empty maps can be made for any current map size. The recipes is just a basic empty map, plus one piece of map paper for each expansion level. In itself, this is only marginally useful, but atlases can use expanded empty maps to automatically create tiled map groups.

Expanded empty maps can also be made directly from compasses; one piece of map paper to create a map, and an addition piece for each expansion level: 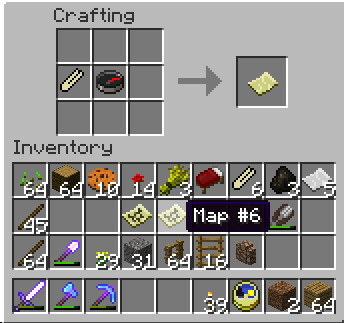 Aligning maps:
You can create a new map exactly aligned to an old one, so they will tile if put up on the wall. The old map goes in the center. You put a compass in the direction you want the new map to be, and then enough map paper to make a map that size (1 piece, plus 1 more for every time the center map was expanded; 5 for a maxed-out map). The map paper can go anywhere on the grid. Here’s a once-expanded map around a village base of mine: Here’s the recipe to make a map that tiles above it: 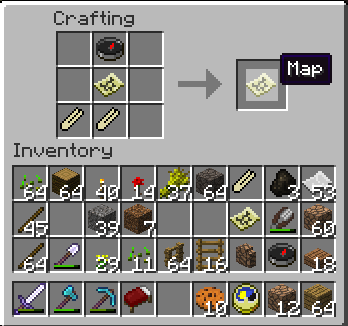 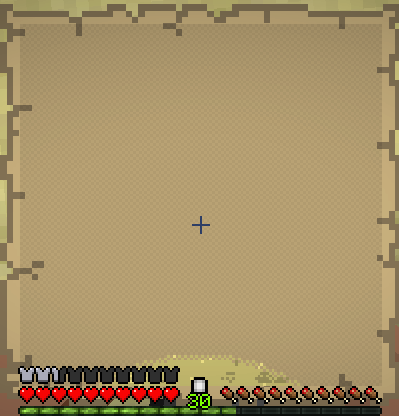 Notice the small mapped area because as I made it I was standing close enough to get a little info onto the map. I could have been anywhere to make the map, however.
When you use this recipe the old map is left in the center of the crafting grid.

You can expand maps with map paper instead of regular paper. You can expand multiple levels at once, and you don’t have the odd problem in vanilla where sometimes maps have to be viewed before they can be expanded. Most usefully, the information on the old map is copied to the new one.

To expand a map, put it in the center and one piece of map paper for each level of expansion. Here’s the recipe to expand the map above by one level: 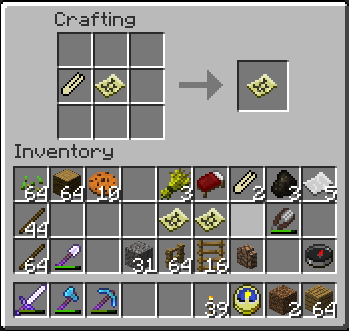 And here’s the result: 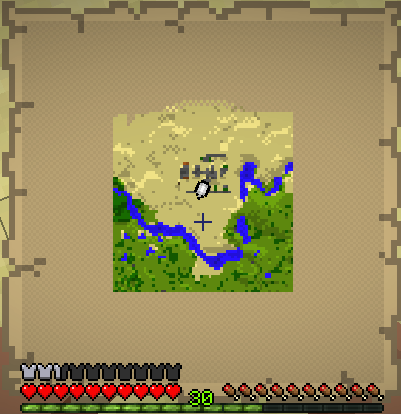 Note the original map is used up, just as with the vanilla recipe.

Map copying:
ExplorerCraft lets you copy information from one map to another. Unexplored areas on one map are filled in with matching explored areas on the other. Explored areas are not altered. The maps don’t have to have the same center or even be at the same scale, although copying from a larger-scale to a smaller-scale map will produce blockier areas on the target. These will be corrected with exploration. Copying from a smaller to a larger-scale map works just fine.
For the recipe, the source map goes in the center and the target map on the top. You also need red, yellow, blue, and black dye, plus a stick, as show below: 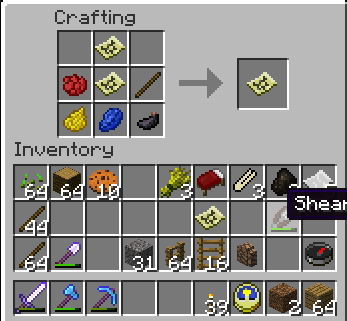 In this case I used a max scale map in the center as the source and the expanded map above as the target. The recipe converts the map in the top row into the new map and leaves the other in the crafting grid (2 maps in, 2 maps out) The result is: 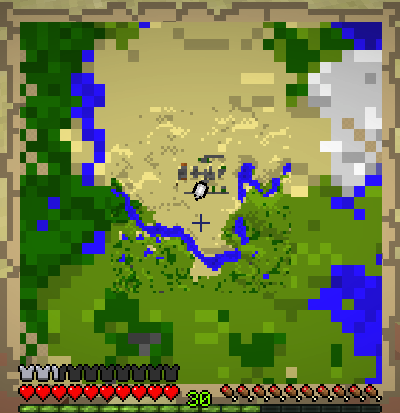 Hope you find this as useful as I have.

Dear youtuber!
Have you a channel youtube about minecraft?
Do you want to bring your Video to quality visitors?
Do you want your video to appear on our website?
Do you want to become partner with us?
Just 3 steps to become our partner:
Step 1: Make video review for mod, which you like
Step 2: Upload this video to youtube and our link to your video description
Step 3: Send the youtube video link via message to http://fb.com/revozincom or leave a comment in the post. We will add your video in the our post, it will help you have more view.
JOIN to get more youtube view with us!!!!